A ground-breaking freedom of information series written by seven Indiana newspapers won this year’s Joseph L. Brechner Center for Freedom of Information award, according to Sandra Chance, director of the Brechner Center. The five-part series, titled “The State of Secrecy: Indiana flunks the test on access,” detailed the abysmal compliance rate with the state’s public record law.

The Indiana investigation documents how many government officials routinely violate the law by refusing to release public records. For example, the series reported that almost three-fourths of the state’s sheriff’s departments refused to release crime reports. In addition, the papers were able to document and report the way people who requested public records were threatened. According to the study, they were lied to, harassed, repeatedly questioned and told that court orders and subpoenas were necessary before the records could be released.

“This series represents the best example of how newspapers can work with private citizens to learn more about their government,” according to Chance. “It’s one thing to hear the stories about how citizens are denied access to records. It’s another thing to actually go out there and prove what we’ve long suspected in a scientific, documented way. “Officials can no longer ignore these findings and dismiss them as isolated incidents. Violations of the law are rampant everywhere and this series proves the extent of the problem in Indiana,” Chance said.

The seven papers that participated in the award-winning series were: The Evansville Courier, The Journal Gazette, South Bend Tribune, The Indianapolis Star/News, The Star Press, Tribune Star, and The Times of Northwest Indiana.

As the papers discovered, access to government records and meetings is more than a media issue, according to Bill Theobald, of The Indianapolis Star/News, who coordinated the contest entry. “It’s a citizens’ issue.” The series also revealed that many public officials were ignorant of the laws and that little was being done to train them. After the series ran, Indiana’s governor created a public access counselor position. The counselor answers questions about the law and issues advisory opinions. So far, a large majority of requests have come from the public, despite repeated comments by public officials that this is only a “media” issue, Theobald said.

The project was lauded by the judges for its excellent writing and research, as well as its impact and innovativeness. “Citizens all over Indiana should be standing up, cheering and showering bouquets of thanks on these papers for changing how things are done in government across the state,” according to one judge. Another judge congratulated the papers for their “sober, detailed and ultimately frightening look at how government officials at all levels blatantly disregarded the Freedom of Information law as if it were nothing more than junk mail.” The independent panel of judges said the scope of the project and the cooperation of the newspapers are unprecedented and should set the tone for similar projects around the nation. The judges for the competition included Paul D’Ambrosio, investigations editor and winner of last year’s series, media lawyer Kathy Pelligrino, and Barbara Fought, associate professor at Syracuse University.

The annual award was established by the late Joseph L. Brechner, an Orlando, FL, broadcaster. Previous winners include the Asbury Park (NJ) Press, the Sun-Sentinel, The Times-Picayune, The Washington Post, the Houston Chronicle, The St. Petersburg Times, the Dallas Morning News and the Columbia Journalism Review. 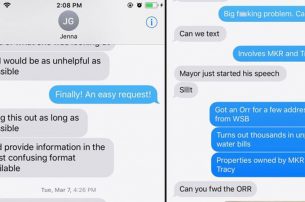